I guess I should have posted this last week, but we’re right in the middle of a major remodel in our city house that involves power saws and constant hammering so the ruckus is interfering with my normal brain function. This would usually be considered the dumbest time ever to begin any sort of remodelling work and most people would probably wait til after the holidays to get started, but around these parts we have to take advantage of the (very) short dry season to do repairs and remodeling. And the dry season has now officially begun. I haven’t been in the Christmas mood much this year though because in addition to the work being done in my house, they have also begun building a new McDonald’s right across the street (GAH!) which will be nestled smack in the middle of a small shopping center that is also being built even as I type. When I say across the street I mean 30 yards from my front door. Gone are the beautiful tall green trees that used to whisper and rustle in the wind and that I used to admire from my front balcony. Now I’ll have a view of golden arches and hungry shoppers. The dust that is being kicked up is unbelievable and I haven’t felt like putting much up in the way of decorations because I don’t want to have to be dusting them several times a day. I did manage to set my dining room table though, and I thought a color scheme of cobalt and gold would be nice. However, I was dismayed when I was unable to find goblets in either of those colors. After checking online for options, I came across some (really easy) DIY goblets encrusted with glitter. Now that’s MY kind of project! I had about a dozen or so unused wine goblets that had been left over from a free give-away at our store so I grabbed those and got started. (Did I mention this was easy?) 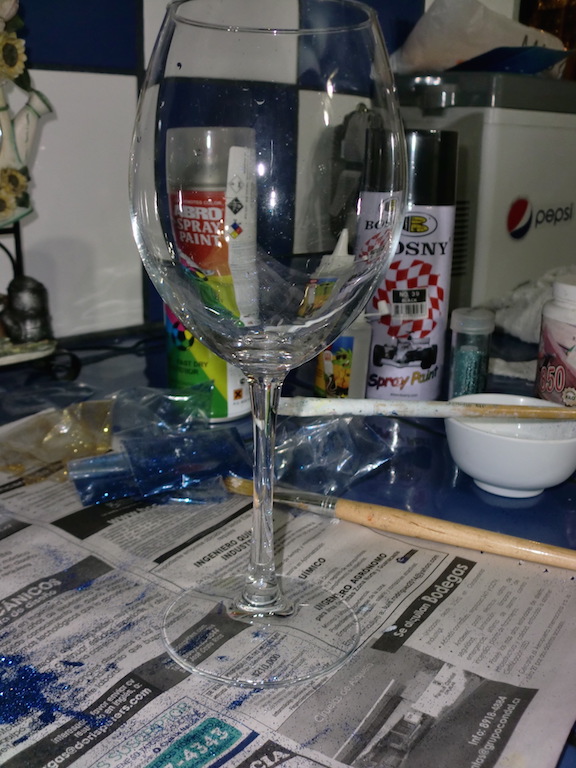 First I applied glue to the parts of the goblet that I wanted to glitter up. 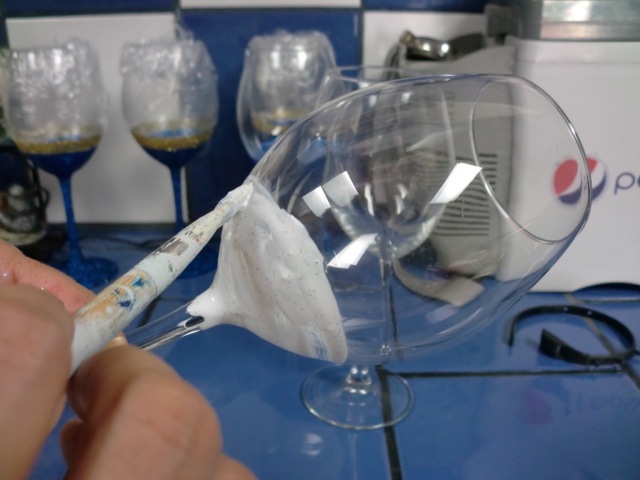 Then, working over a sheet of newspaper (to catch all the falling glitter for re-use and zero waste) I took some ultra-fine glitter in cobalt blue and sprinkled it over the glued area. Then I set the goblets aside to let them dry completely.

After the blue glitter was dry, I brushed on a thin strip of glue right above it with a paintbrush and then applied gold glitter to it. I just used regular Elmer’s glue for this project BTW. Even though it will look milky white when it’s wet, it dries perfectly clear and becomes invisible when dry.

In order to set the glitter and make it stay on permanently as well as making the goblets hand washable, I sprayed the glittered area of each goblet with two coats of clear spray enamel. (clear varnish is fine too) In order to prevent the top parts and the rims of the goblets from getting any spray paint on them, I covered the top halves with plastic wrap before spraying them. 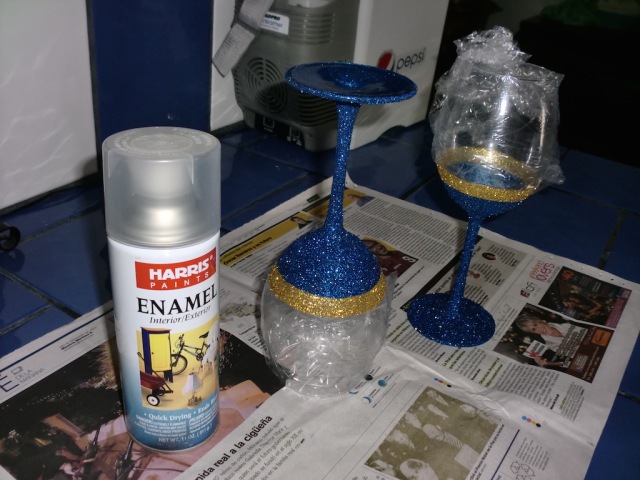 Then I let them dry overnight before putting them on the table. 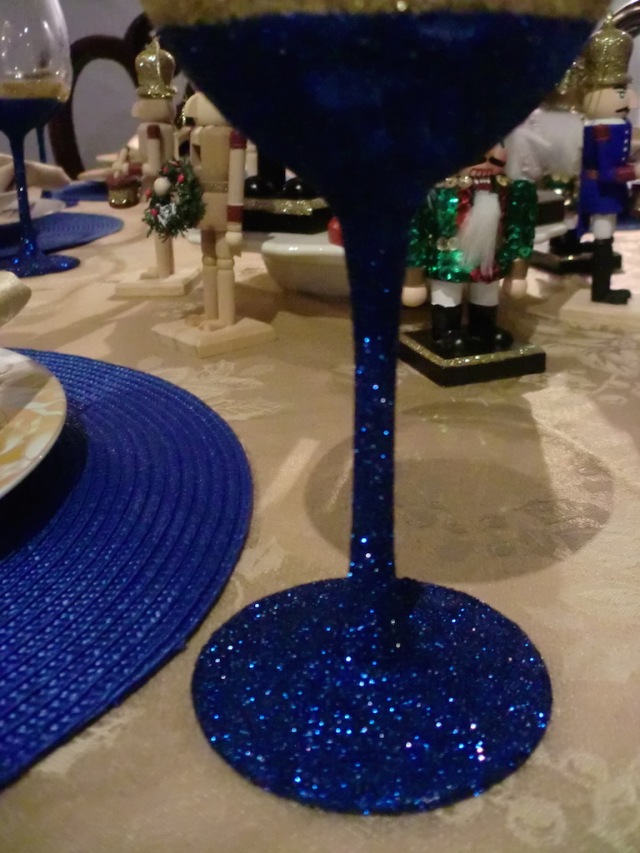 Since the table is all set and ready, I now feel obligated to dust off the kitchen counters and pop a couple of pies and a turkey in the oven lest my family disown me. Merry Christmas!

I must have been a magpie in a past life.  I know I’ve said that before, but it’s the truth. Anything that glitters and shines makes me stop and do a double-take. This is exactly what happened when I came across a breathtaking collection of vanity items beautifully adorned with jewels and rhinestones. I spent hours looking at all the pictures until my eyes watered and I was wiping drool off my keyboard. There were jeweled mirrors, jeweled trinket boxes, jeweled perfume bottles and even jeweled seashells. END_OF_DOCUMENT_TOKEN_TO_BE_REPLACED 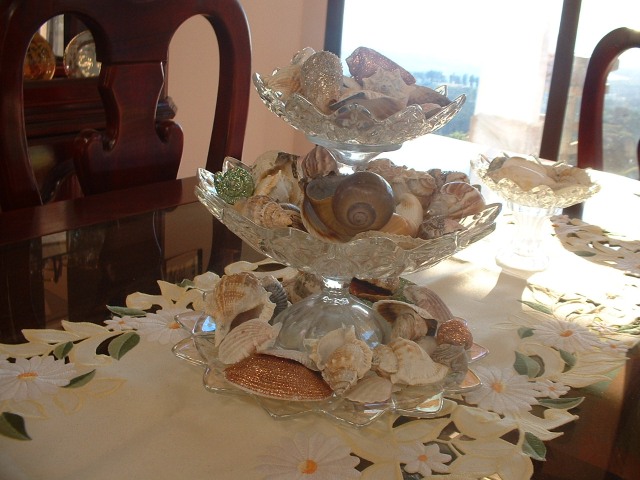 My daughter has a a huge shell collection which she adds to every year when we go to the beach for our January vacation. She loves to walk on the beach very early in the morning at about 6:00 am when the tide is so low that you can barely see the water from the shore. Strewn all over the wet sand are all kinds of wonderful sea treasures which she picks up in and saves in a little plastic bag that always accompanies her on these beach treks. I was beggining to run out of places to put the shells as the collection just keeps growing and growing. I placed some in flower pots around the base of plants, others in glass jars, and other in little wooden curio boxes. I kept the remainder stored in a tin bucket outside the kitchen door (for lack of clever ideas) where they sat getting dusty and wet from the frequent tropical rain. And then, I saw a picture of some glittery shells online somewhere which immediately triggered an idea. Yes! I would make glitter shells!  END_OF_DOCUMENT_TOKEN_TO_BE_REPLACED

Past Postings by Month

A Day of Small Things...

Equals a big life of happiness.

Found This Painted That

Decorating Solutions for the Dollar Challenged

The little white cottage in the woods